Pretty pink petals, dark tree bark, a festival to celebrate their arrival… cherry blossoms are a big deal in Asia. Here in Korea, they symbolise purity and they are made all the more special due to their short time in full bloom, forcing humans to stop their busy lives and just appreciate nature at its finest. But they haven’t always been viewed so sweetly; they are also integral to a desperately sad part of Korean history, the Japanese occupation which spanned thirty or so years before the surrender of Japan at the end of WWII. Korea, Japan and more recently, China, all stake a claim to the origin of the cherry blossom tree however this post will not delve in to that debate. It will primarily focus on my experiences with the blossoms in Korea; something I thoroughly looked forward to and enjoyed. 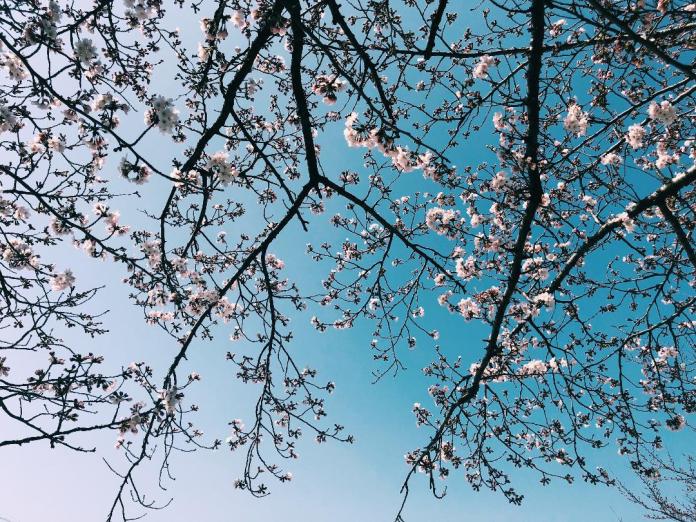 Blossoms at my girls school!

The Jinhae Gunghanje festival (진해궁한제) is an annual event held in the small district of Jinhae, located in Changwon city, at the beginning of April. Hundreds of thousands of people flock to this festival every year with the desire to view the abundant cherry blossoms, snap an Insta worthy photo and to revel in the official start of spring. This year, the festival was held from 1st April – 10th April so I headed to Jinhae to become a cherry blossom viewer on the first day of the festival. Living in Busan, Changwon lies just to the west and therefore getting to Jinhae was super easy; a 1 hour coach trip, costing only 5,100\ from Sasang station. I caught an early coach with friends on the 1st April with my camera at the ready… Our first Jinhae stop: Yeojwacheon Romance Bridge (여좌천 로망스 다리).
I’m not 100% sure which bridge is the actual Yeojwacheon Romance Bridge as there are numerous bridges in a row that cross over the Yeojwacheon stream however I am certain this place is absolutely stunning! The cherry blossom trees line either side of the stream, their branches hanging low and swaying in a gentle breeze over a shallow body of water. I walked the length of the stream before venturing down to stroll along the cobbled bank. Despite the mass of people surrounding me, I felt at peace amongst the blossoms and the water; I could have stayed there for hours just appreciating the scenery around me. 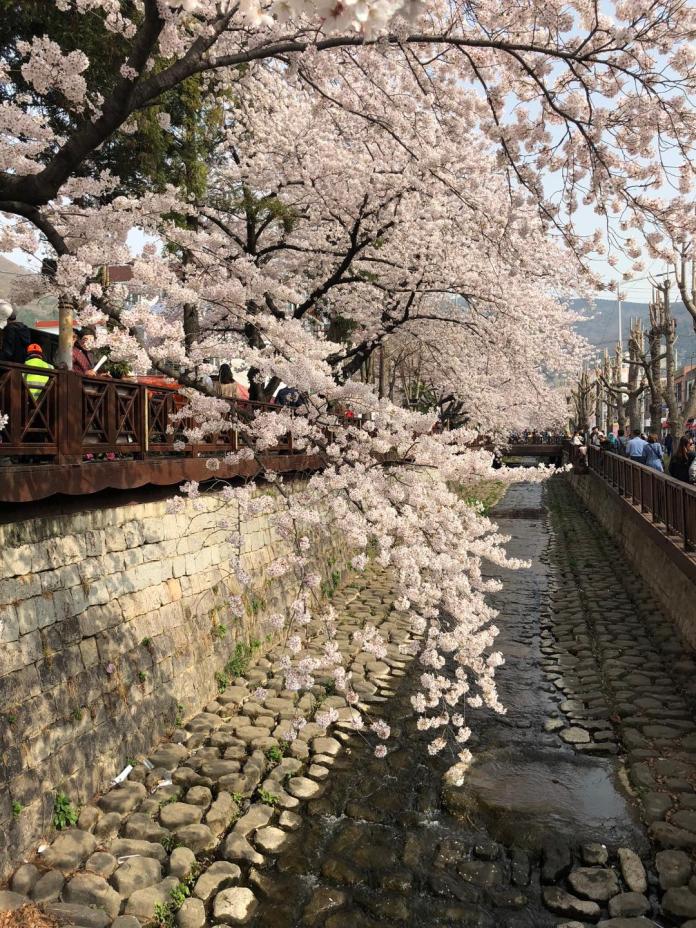 Our next stop in Jinhae was Gyeonghwa (경화역 봊쏯길); a now closed railway station labelled Cherry Blossom Road due to the abundance of trees planted there. The Korean government have left an old Korail train in situ on the tracks to make photos appear more authentic as back when the station was still in operation, carriages used to whoosh past the trees, enabling petals to fall elegantly and allowing visitors to snap beautiful photographs. The old train itself reminded me of the one used by Seok-woo, his daughter and Seong-Kyeong at the end of Train to Busan when they make one last, desperate attempt to flee an onslaught of zombies and I was tempted to pose just like our hero against the rails before he transforms in to the undead however I ditched the idea due to the crowds of people at Gyeonghwa. The queue to take a photo by the train consisted of roughly 50 people alone! People were milling here, there and everywhere over the tracks and around the food stalls that had been erected especially for the festival! Gyeonghwa was pretty but too busy for me.

Just a handful of the people queuing to take a picture in front of the Korail carriage!

The following week at work, I showed my co-workers some of the snaps I had taken in Jinhae and the first question the majority of them asked me was: “was it very busy?”, to which I answered: “yes!” to a chorus of: “ahhh!”. One co-worker was then kind enough to suggest a more unique, less touristy cherry blossom viewing experience; a hike up Hwanglyeongsan (황령사) to witness awesome views before a descent down Busan’s very own Cherry Blossom Walkway. Ever since being in Korea, I had been keen to start exploring the numerous mountains dotted around the city so I jumped at the chance to get my first hike under my belt and made arrangements with a friend to accomplish Hwanglyeongsan the following Saturday.
The climb itself is pretty easy; the toughest part is the steep stretch on the residential streets before reaching the actual trails. All in all it took roughly two hours to reach the summit and that is including one brief toilet break and numerous extended photo op stops. The view at the top is quite simply exquisite; an expansive sight stretching from east to west, covering numerous Busan neighbourhoods, the sea in the distance, whilst also including various sky scrapers and bridges such as the Diamond Bridge/Gwangandaegyo (관간대교). My friend and I spent some time trying to decipher the different areas to no avail before just sitting and appreciating what lay before our eyes.

The epic view from the top of Hwanglyeongsan!

To reach the Cherry Blossom Walkway, we had to descend Hwanglyeongsan in the opposite direction of our ascent; it was a 15 minute amble through some shrubbery and across some boulders with another spectacular view. The walkway itself is just an ordinary road that serves as a path for people and vehicles alike however during the first two weeks of April, much like Yeojwacheon stream, the road plays host to a bounty of cherry blossom trees lined up on either side, pink petals and almost black branches framing the concrete beautifully. Yet what made this unique compared to Yeojwacheon was the absence of other people. Sure, a few cars passed by, stopping now and then to snap a photo or two but there were no crowds, no buzz, no craziness; it was just me, my friend and Mother Nature doing her thing. We stayed on the walkway for well over an hour, venturing back and forth before finally watching the sun set through the branches whilst we made our way down the winding path.

Have you had the opportunity to view cherry blossoms in Asia? Share your experience down below in the comments! 🙂