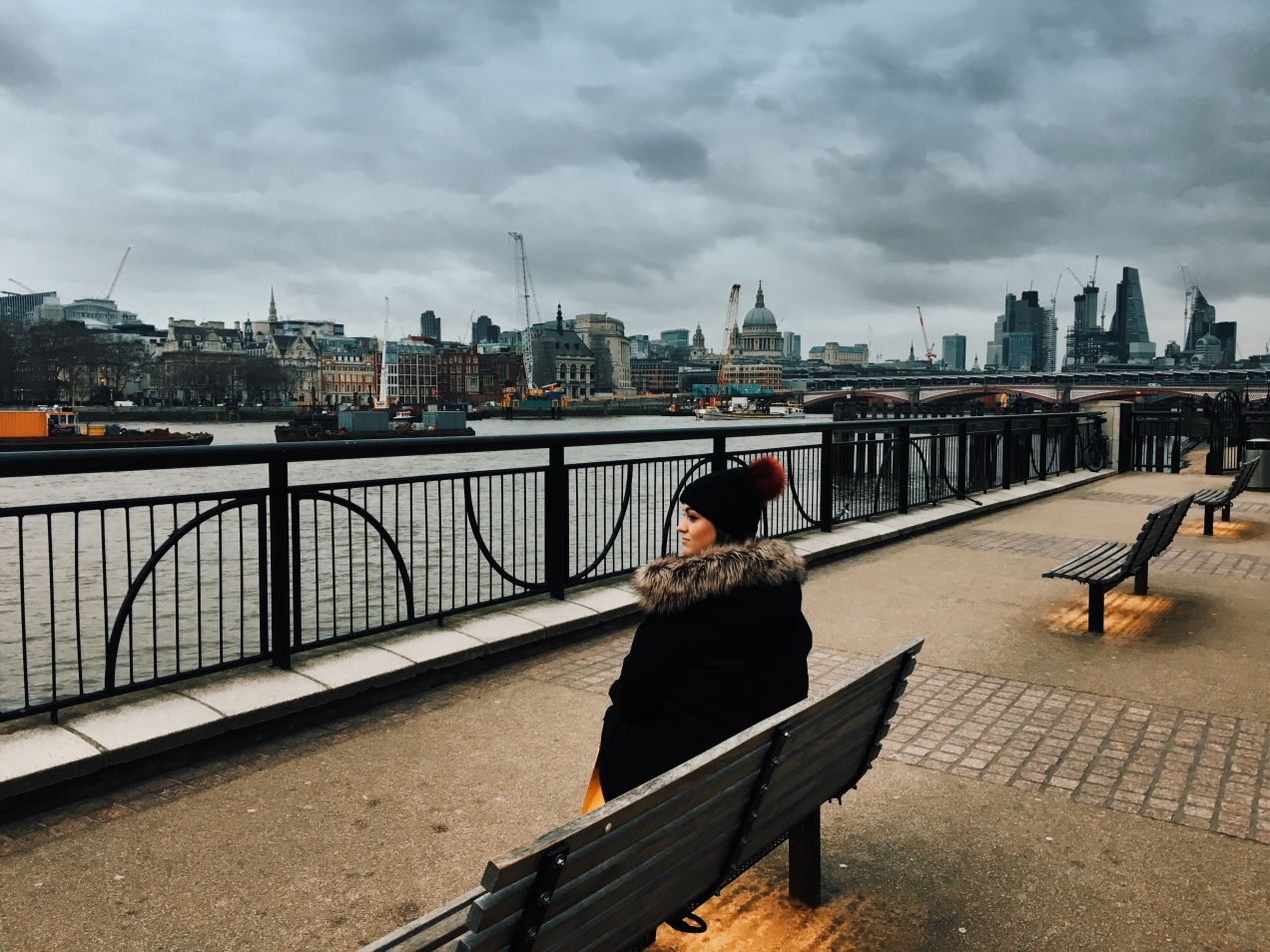 I have just returned from a whirlwind trip to the capital city of my country, London! 36 hours of film location exploring, phenomenal food and a whole load of fun. I have been to London numerous times and always forget just how much I bloody love Britain’s capital city! Such a vibrant, unique, colourful city! I set off from Manchester Piccadilly with my mum on the 4th of Feb at 3:30pm; just over two hours later, we arrived at Euston train station, updated our Oyster cards and jumped on the tube to check in to the Hub by Premier Inn based near St. James Park in Westminster. Two nights at this budget hotel cost us £143 altogether; such a steal for such a central location in London town considering my previous trips have had me fork out over £150 for two nights in pub hotels in both Greenwich and Acton. The room was extremely comfortable; it had a bed, a tv, one chair and a good-sized wet room… what more do you need?! We dumped our bags and headed out for some scran. I had heard about a burger joint called Honest Burgers in Soho so we took a stroll down Horses Guard Road, crossed the Mall and headed for an epic burger dinner. While walking we passed Piccadilly Circus; an iconic location home to the big advertisement screens seen in numerous films, Bend it like Beckham and Bridget Jones’s Diary, to name a couple! The restaurant itself is pretty small, probably seats about 20-30 people at one time but if it is busy, they take your number and call you when your table is ready, instead of having you queue. Luckily for us it wasn’t all full up so we were seated immediately. My mum ordered the chicken burger, a nice healthy option in comparison to the other sandwiches on the menu. I went for the special; a beast of a burger called the Disco Bistro! A massive beef patty garnished with pink onions and a pineapple, bacon jam; the perfect tangy, sweet companion! 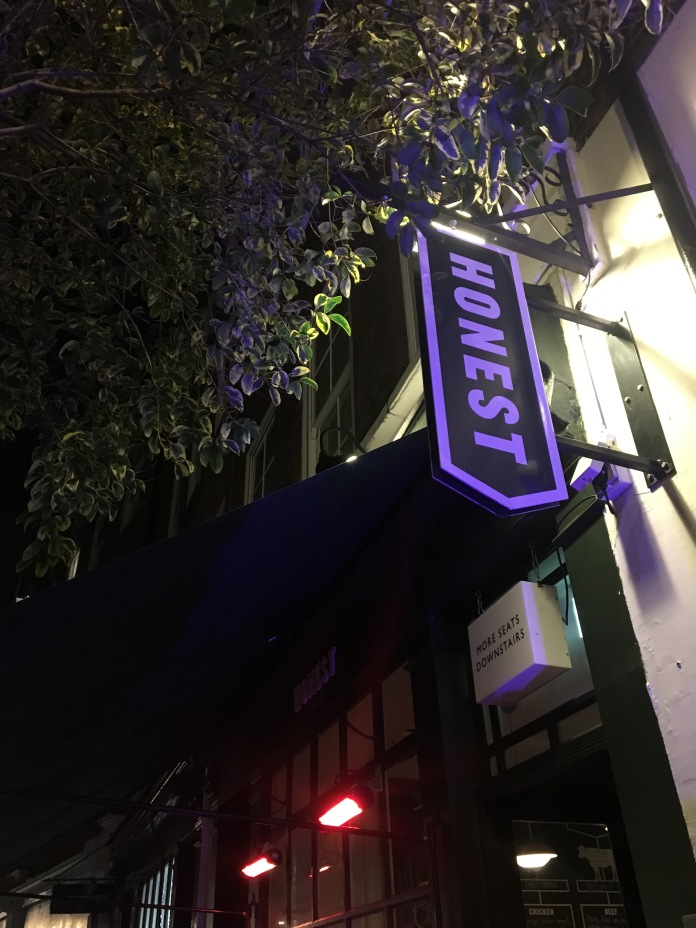 The exterior of Honest Burgers – Soho!

We planned to visit the South Korean embassy (the main reason for our trip to London) to sort out my visa for my impending year-long trip to Busan so we knew we would have an early start the next morning, so after being fed and watered, we headed back to our hotel for a good nights kip. After doing what needed to be done visa-wise the next day, it was time to explore! We had a fulfilling brekkie at a lovely, little place called the English Rose cafe & tea shop located in Westminster, a short walk away from Victoria Station. The cafe had a wonderful atmosphere, quaint decor, including an artificially lit fireplace, hanging teapots on display and a cute, little dresser with the blue and white China plates I’m sure most people have encountered in either their own kitchen or the home of a friend, and the food was delicious and reasonably priced! 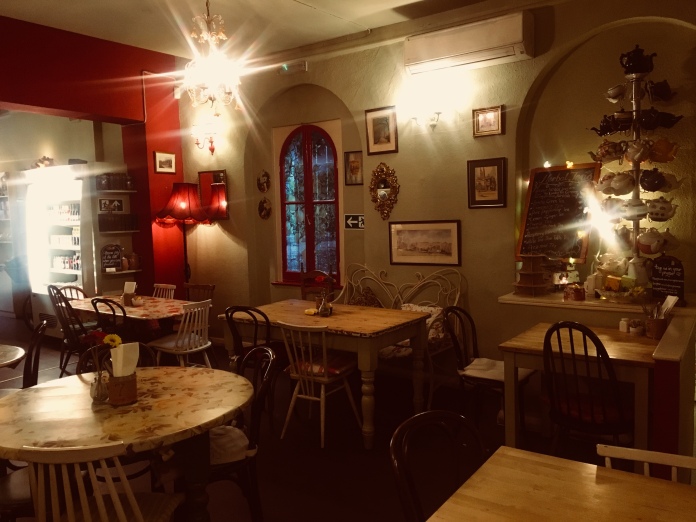 The interior of the English Rose cafe & tea room!

We spent the early afternoon in Camden, first wandering through the clothes market on the high street, before heading over to Camden Lock. Now if you have ever visited Afflecks Palace in Manchester and appreciated its unique character then you will LOVE Camden Lock! This place is full of little stalls, independent traders selling one-of-a-kind pieces. I spent a long time marvelling over artwork by a guy called Jeff Michalik (www.killerbunny.co.uk); he does prints of iconic characters from various films. I ended up purchasing nine different prints for £20; I got six Disney princesses (#disneyobsessed), one of Jason Voorhees, one of the sorting hat from Harry Potter and last but not least, one of the insanely cute droid, BB8! I cannot wait to frame them all and have them on display in my Busan accommodation; they will provide awesome splashes of colour on what I imagine will be bare, white walls! We strolled through the market stalls, admiring the products on offer; jewellery, cushions, bags, scarfs and other pieces of artwork before stopping at the Camden Market Photo Booth and failing at getting some pictures. We finished off our time at Camden Lock with some dutch pancakes smothered in melted nutella and chopped strawberries with hot drinks, a chai latte for me and a hot choccy for mum – all of which came to a tenner!

We hopped back on the tube and headed over to the Embankment stop; it was time to walk along the River Thames and spot the locations used in Love Actually and Harry Potter and the Half Blood Prince. The first location we tracked down was the benches at Gabriel’s Wharf. This location was used in Love Actually; it played host to the scene where Daniel (Liam Neeson) sits with his stepson, Sam (Thomas Sangster) to give him some love advice in regards to his seemingly unrequited crush on Joanna. These two characters and the storyline they share have always been my favourite part of Love Actually; I love the innocence of Sam and his feelings for his classmate and Daniel comes across as the sweetest father figure! I actually sat on the exact same bench patiently awaiting the arrival of Liam in the hopes he would give me some good life advice! Needless to say, he never arrived but a girl can still dream! We walked along the south bank a little further and stumbled across the scene where Mark (Andrew Lincoln), embarrassed by the fact his love for his best mate’s wife has just been revealed in the most awkward way possible, walks whilst gliding his hand across the stone wall between walkway and water. Naturally I reenacted his exact movements to the bemusement of my mum.

Where are you, Liam Neeson?!

Even further along the south bank is Millennium Bridge, which any half decent Potter nerd will know is the bridge the villainous, evil Death Eaters destroy whilst covered with unknowing Muggles making their way to work at the beginning of the sixth Harry Potter film! It’s unique metal and persplex design isn’t exactly hard to recognise. I took it as the perfect opportunity to whip out the sorting hat print by Jeff Michalik I had bought earlier and take a snap! The best thing about strolling around London in search of filming locations is that you can just happen across them; you do not need to part with money in order to appreciate the structures, sites and scenes you see emblazoned on the big screen. There are sooooo many other locations I would love to visit, free of charge, in London that have been used in various films. St. Lukes Mews in Notting Hill is also featured in Love Actually, Borough Market which is used in Bridget Jones’s Diary and loads others but sadly I just did not have enough time on this particular trip but I’m sure I’ll be able to tick them off next time I visit London!

After our filming location expedition, we headed over to Mod in Leicester Square for a bite to eat. Mod is an awesome pizza place! They have various pizzas on the menu to choose from which you can personalise or you can choose to make one from scratch. All pizzas, regardless of add-ons or how many toppings you decide to make your own, cost only £7.87! The bases are thin and crispy, proper Italian style and there are endless sauce and topping options to choose from. I went for a garlic rub base, mozzarella and asiago cheese, pepperoni and spicy sausage, black olives with both a balsamic fig glaze and a pesto drizzle! So damn tasty!! For dessert we went to Bubblewrap Waffle in China town and shared a light and soft waffle cone, drizzled with white chocolate sauce and chopped strawberries. 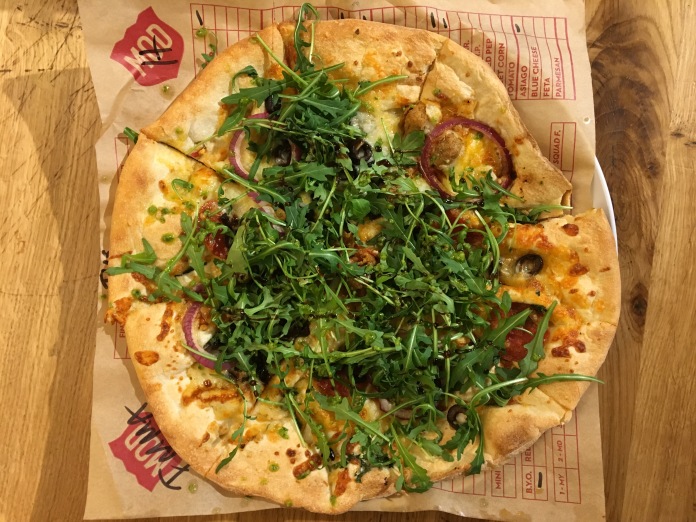 My personalised pizza at Mod!

With full bellies, it was time for our evening activity, the Jack the Ripper walking tour provided by Discovery Tours & Events. We had booked our tickets for a tenner each in advance online and we had to meet our tour guide at exit 4 of Aldgate East tube station, an easy ten minute journey on the District Line from Embankment. We checked in with our tour guide, Angie, and headed out with a sizeable group of about 25 people, for our two hour long walk around Whitechapel and Spitalfields, learning about the grizzly, gruesome murders committed by the famous, unknown assailant, Jack the Ripper. I can’t speak for my mum but I found this tour immensely interesting and unforgivably creepy with Angie only adding to the eeriness by handing out various photographs of the Ripper’s victims whilst describing their grotesque murders by deepening her voice and hitting the wooden doors of buildings dotted around the neighbourhoods we were roaming. Furthermore the tour has made me want to watch the first series of Whitechapel for the millionth time; a three part series which unravels the mystery of Jack the Ripper with a copycat killer committing similar crimes in the same locations. For anyone who hasn’t seen this show, watch it! It is available on Netflix and spawned three additional series, the second of which focuses on the Kray twins.

The location in Mitre Square where the body of the fourth Ripper victim, Catherine Eddowes, was found…

London is an epic city, it has something for everyone and I am sure as hell going to be visiting it more often when I return home after my time abroad! Is there any other filming locations you know of, that are free of charge, in the city of London? Are there any other walking tours you can recommend? Let me know in the comments below!